Growth is set to rebound gradually in 2021, although persistent downside risks might point to a longer recovery. The lockdown measures and curfews imposed by the government in March and July of 2020 weighed on household consumption (55% of GDP) through a rise in unemployment, which stood at 6.8% in November 2020 after peaking at 7.5% in July. The household savings ratio climbed to 18.9% in Q3 (22.1% in Q2) compared to 6.2% at the same period of 2019. These savings should partly cushion the household debt ‐ already high before the pandemic ‐ that worsened and reached 121.4% of GDP in Q2, nearly twice of disposable income. Looking ahead, household consumption recovery is therefore likely to remain soft in 2021, considering the high level of debt and the unemployment rate, which are unlikely to be absorbed quickly in the context of moderate growth. Furthermore, international and domestic tourism (10% of GDP before the crisis), hard hit during the pandemic, is unlikely to recover until the second half of 2021, as international borders remain closed. The housing market is set to improve in 2021 due to the increase of home price indexes in Sydney and Brisbane in the second half of 2020, as consumer and business confidence gradually improved. This was driven by interest rate cuts by the Reserve Bank of Australia (RBA) to reach a record low of 0.1%, which reduced mortgage repayment costs. The construction industry (9% of GDP) should also benefit from it. Inflation should slightly increase, but remain below pre‐COVID‐19 levels and the RBA’s target range of 2‐3%, as consumption, which would be emerging from the pandemic, is likely to remain sluggish. On the external front, exports (22% of GDP) should remain moderate and under pressure in 2021 due to weak global trade and the ongoing trade war with China, the main trade partner. That being said, some exports should cushion the blow. Iron ore prices and demand, which are unlikely to be concerned by tariffs, will be driven by China’s recovery in infrastructure and Australia will remain the largest iron ore supplier to China.

The government should register a record high budget deficit in 2020 and 2021 in order to boost consumption and employment, which were wiped out by strict containment measures. For the fiscal year 2021 (July 2020‐June 2021), the budget includes measures (8% of GDP) that cover tax relief for low and middle‐income classes, and that bolster hiring, especially among the youth. Debt is expected to increase, but external risks should be limited as foreign investors held 53.1% of the debt as of June 2020, and this figure is set to drop further as, in November 2020, the RBA started to purchase Australian Government securities (AGS) on the secondary market under the AUD 100 billion bond purchase program.

The current account surplus, which surged in 2020, should fade away in 2021, dragged down by a decreasing surplus in the balance of goods and services. Goods imports should recover faster than exports, as the easing of containment measures should revive domestic demand. The expected rise in exported commodity prices will not suffice to match the increase in imports, as coal exports will be hurt by unofficial Chinese embargo. Furthermore, export of services should drop as well. The intensification of tensions between Australia and China will probably affect services trade with China, which is largely composed of education (27% of total students in 2020) and tourism (16% of total visitors). Moreover, the usual secondary income deficit, which fell in 2020 due to the decrease in dividend repatriation by mining companies and interest payments on external debt ‐ mostly private (mining companies, banks, property sector) and denominated in Australian dollars ‐ should increase slightly in 2021. The capital and financial account deficit will remain negative, as foreign direct investment and overseas borrowing feed liabilities, and the negative international investment position reached 40% of GDP, making Australia one of the largest debtors globally.

Political instability on the rise

The centre right Liberal‐National coalition led by Scott Morrison, which was elected in the federal election of May 2019 and secured 77 out of 151 seats in the lower house, started its third consecutive term in office until 2022. This should allow Prime Minister Scott Morrison to continue his policy agenda, which focuses on tax cuts and the maintenance of a balanced government budget. However, the administration’s response to the bushfires in 2020 (unwillingly admitting that climate change played a role) combined with the strict restrictions in response to the pandemic fuelled a growing distrust among Australians. On the external front, the relationship with China worsened when Australia called for a global and independent investigation over the pandemic’s origins at the World Health Organization’s annual meeting in May 2020.

Parties are encouraged to negotiate and take “genuine steps” to settle commercial disputes prior to commencing  proceedings. Parties in the Federal Court and Federal Circuit Court must file a “genuine steps” statement. Examples of such steps include settlement negotiations and informal settlement conferences with the other party.

If the amicable phase fails, proceedings will commence. The New South Wales (NSW) Supreme Court has a special list for commercial disputes, where it will proactively manage them to ensure an efficient resolution. Similar lists also operate for commercial disputes in the Supreme Courts of Victoria (Vic), Western Australia (WA) and Queensland (Qld).

If a corporate debt is overdue, uncontested, and over AUD 2,000, the creditor may issue a creditor’s statutory demand for payment of debt demanding payment within 21 days. Unless payment or an application to set it aside is made to the Court in this time, the company is presumed insolvent. The creditor may lodge a petition for winding-up of the debtor’s company. The presumption of insolvency lasts for three months following service of the statutory demand. For individuals, the process is similar, but proceedings are required to be commenced in the Fed Circuit Court or Fed Court.

In NSW, in debt recovery proceedings, a statement of claim must be personally served on the debtor, who must then pay the debt, or file and serve a defence on the creditor within 28 days (NSW), failing which default judgment may be entered against the debtor. There are different time frames for different states. If the debtor does not pay the debt and files a defence, orders will be made by the court to prepare the matter for hearing including discovery and the preparation and exchange of evidence that will be relied upon at the hearing.

During this phase, the parties may request and exchange particulars of the claim or defence made by the other party in the form of documents referred to in the claim or defence (e.g. copies of the relevant unpaid invoices and statements of account). If discovery is ordered, the parties will be required to exchange all documents that are relevant to their case. Otherwise, all documents which the parties wish to rely upon at the hearing must be included in their evidence. Before handing down judgment, the court will hold an adversarial hearing in which the witnesses of each party may be cross-examined by the other parties’ lawyers. Typically, straightforward claims may be completed within four to six months but disputed claims may last more than a year.

If a party is not satisfied with the judgment awarded by the court, it may appeal the decision. Appeals lodged against Supreme Court decisions are heard by the Court of Appeal in that state/territory. Any further appeal thereafter is heard by the High Court of Australia. The party seeking to appeal must seek leave and persuade the Court in a preliminary hearing that there is a special basis for the appeal, as the High Court will only re-examine cases of clear legal merit.

Local Courts or Magistrates Courts (depending on the state/territory) hear minor disputes involving amounts up to a maximum of AUD 50,000 Tasmania (Tas), AUD 75,000 Western Australia (WA), AUD 100,000 (NSW, Vic, South Australia (SA)), AUD 150,000 (Qld) or AUD 250,000 (Australian Capital Territory (ACT), Northern Territory (NT)). Beyond these thresholds, disputes involving claims up to AUD 750,000 in NSW, WA, SA or Qld are heard either by the County Court or District Court. There is no County Court or District Court in Tas, NT or ACT. Claims greater than AUD 750,000 in NSW, Qld, SA, and WA are heard by the Supreme Court of each State. The Victorian County Court and Supreme Court have an unlimited jurisdiction. In the other states and territories, the Supreme Court hears claims greater than: AUD 250,000 in the NT; AUD 250,000 in ACT; and AUD 50,000 in Tas.

Enforcement of a legal decision

A judgment is enforceable as soon as it is entered by the court. The plaintiff has up to fifteen years following the entry of judgment to pursue enforcement of an Australian judgment through Examination Notices, Garnishee Orders or Writs of Execution. Examination Notices force the debtor to provide information on its financial situation and assets, helping to establish a recovery strategy. The Garnishee allows the creditor to recover its debt (with interest and costs) directly from the debtor’s bank account or salary as well as from the debtor’s debtors,. Finally, the Writ orders a sheriff to seize and sell the debtor’s property in payment of the debt (together with interest and costs) owing to the creditor. As for foreign awards, enforcement in Australia is governed by statutory regimes (Pt 6 of the Service and Execution of Process Act 1992 (Cth) for judgments given in Australia and Foreign Judgments Act 1992 (Cth) for judgments given outside Australia) and common law principles. Recognition depends on whether a reciprocal recognition and enforcement agreement exists between Australia and the issuing country.

Liquidation: creditors or a court may wind up a company, and appoint a liquidator who collects, protects, and realises the company’s assets into cash, keep the creditors informed about the company’s affairs and distribute any proceeds of sale of company assets. Upon completion of the liquidation, the company is then deregistered. 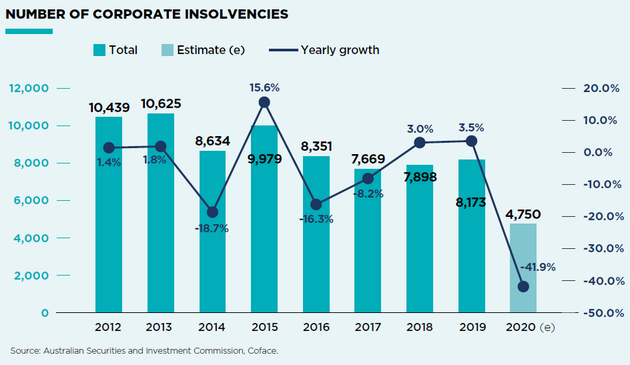